After getting a late-night tweet from Commaner Scott Kelly, I feel enamoured to salute him and share a quick story about how I imagine #astrolife. 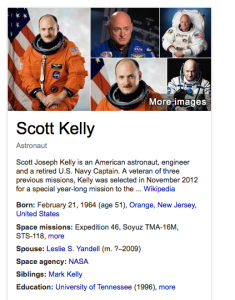 First, I can relate to Scott Kelly for the primary reason of space control. Having subjected myself to confined-space living for over a year, I can empathize that spending a #yearinspace is more than just a challenge in the space arena. Other than that, I have learned plenty of scientific information from the #ISS live feeds from NASA TV and must say that getting a tweet from space last night was one of the most epic feelings ever, and probably the closest I will get to an off-earth experience, but I’m not giving up on that dream, and know that the guys currently in space, are doing things to pave the way to bring more people into off-earth experiences, as well as help today’s generations to learn more about space, and must send some salutes up to the ISS CREW!!