T’day’s first day of classes was a great success! I attended a total of 4 Lectures! Had the opportunity to see some familiar faces in my class so that was totally amazing, and also had some great fun seeing my teachers in action, as well as trying out most of the new classrooms for the first time.

First, I had Physics, and the book was so heavy, and since my Bio Class immediately follows it, I have to pack both my books around, plus two binders, so my load is pushing close to 30 lbs. and my classes are in uhall and pe so I have only a 10 minute window to get to my bio class after physics so I am going to have to start hustling to make it on time. Still need my Bio Text code and have been getting the run-around from the Bookstore, but I hope to receive my code soon so I can ID these Modules and get started!

My Enviro Sci. class was totally funny in some ways, and kind of like a party in some ways because it is the only non-intro class I am taking, so it was refreshing to see that some people were mature, but some kids were possibly drinking and smoking dope before class, but everyone was pretty chill, and the class the good for the most part.

Still have to buy my safety goggles and lab coat, but the Bookstore was insane!! Hour-long lineups that made the old Zoo lineups look short!! 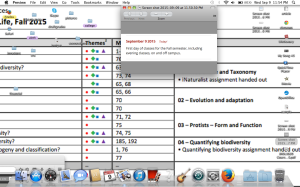 Other than that, I managed to catch the class on successful studies, and started getting involved a little bit with the student services side of things and look forward to meeting the Students’ Union group either as a rep, or as an applicant so meet the team, and so on and so forth.

The Meliorist – Please Don’t Die – We Need You

It will be interesting to see if the Meliorist comes out next week, since the premiere issue was a total bummer. Fresh fest is pricy this year! With a $60 price tag, and still not sure if I should be going, however, it seems like it would be a pretty rad party, but not sure if I have that sort of budget yet because I am still looking for work, but hoping that I hear something back soon, with an interview that I had today, and a possible start date on the 19–22, then that would be a great start and get me going on a solid path to success.

Really glad to be being immersed in this new education of the sciences, and glad that some of my classes overlap in the subject matter, so that I will get better with standard units of measure, and other classification systems in the biological and physical systems. Other than that, not much else is going on. Started a Facebook account and found some good mentors from the Church who have been working.

What really made my day today was not until later on, when I made my registrations for Volleyball, and Floor Hockey, which I will be playing this season since I didn’t make any Pronghorn Teams, and am glad that I now have an active schedule for this Winter.

Also saw an old ex-girlfriend’s ex-boyfriend whom I managed to shake hands with for the first time, and it actually felt so incredibly amazing to shake hands with a person that had such an off-hand influence in my life because we dated the same girl, and there was a lot of animosity surrounding that, but to have been able to connect with that person, after being in the dark about them for so long, was actually an incredible feeling, so I have to hand to my new friend, L.S., who really made me feel like I was a champ, since we are both champs in our own way, and just totally relieved about that like I lost an enemy and made a friend, so that was amazing.

This article was also submitted to The Meliorist in hopes that I get a writing or editing job!! Hire ME!! I like writing, editing, and reading, and going to events, and am pretty good at blogging!